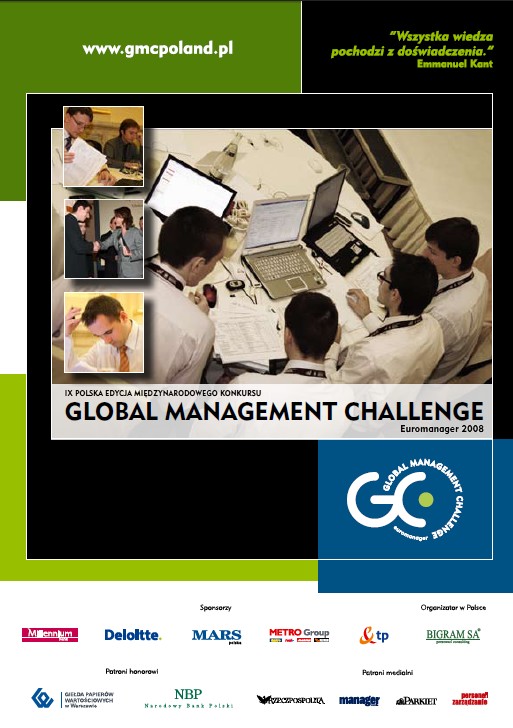 9th Polish edition of the Global Management Challenge began in the end of April 2008 . The record number of 371 teams , nearly 1,600 people register for the competition.  Representatives of the most prestigious companies in the country and the best students from economic and technical colleges, participated in the simulation – in total 70 companies and more than 50 universities.

IX edition of the competition was held under the patronage of the Warsaw Stock Exchange and the National Bank of Poland. The main sponsors of the 9th edition were : Millennium Bank , Deloitte , MARS Poland , METRO Group and Polish Telecom .

On May 26. participants began the first stage of the “real” competition. The teams get into the role of virtual board and take the competitive struggle on the international market. Teams were divided into 64 groups (five or six teams in each one) . The effectiveness of teams within groups was assessed on the basis of share prices of the companies. Two teams in each group progressed to the second round.

Secound stage began on September 1 with 128 teams taking part. Again, they were divided into groups. After five cycles of decision-making  teams with the highest shares value advanced to the Semi-finals. At the final stage of the competition we saw teams of the Bank Gospodarstwa Krajowego , KPMG , Makro Cash and Carry, MARS Polska, BRE Bank, School of Communication and Management and a team of students , sponsored by Bank Millennium , MARS Poland , STRABAG , MultiBank, NBPortal.pl , Rzeczpospolitą and qpracy.pl .

On November 20, day before the Polish finals, we started National Semi-finals. At this stage 16 teams competed with each other.

The National Finals started on November 21. During a one-day session in Warsaw rivaled only eight best teams . The results were announced at a ceremony on the same day . The winning team of the national competition – APVP team from Warsaw University sponsored by Rzeczpospolita – went to Lisbon in April 2009 , where he represented our country at the World Finals of Global Management Challenge 2008 .