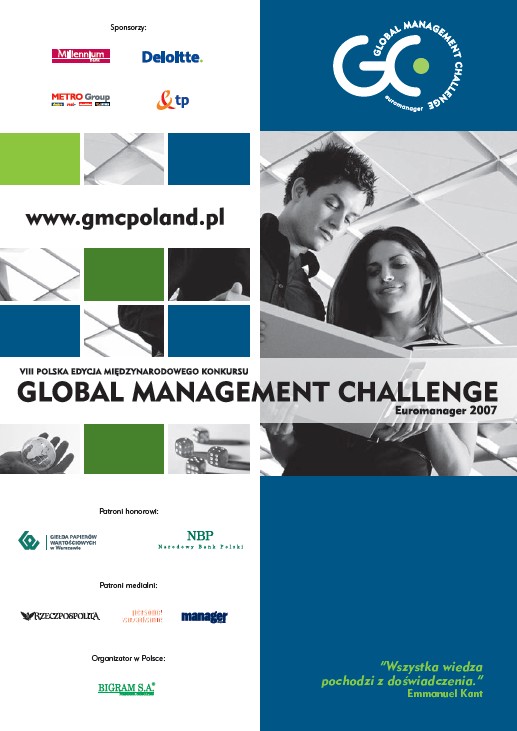 310 teams – more than 1,300 people decided to join competition in 2007. Contest was held under the patronage of the Warsaw Stock Exchange and the National Bank of Poland. The organization of the competition was possible thanks to the sponsors involvmend: Millennium Bank, Deloitte, METRO Group and Polish Telecom.

Competitions was divided into two stages, after which the best eight virtual companies met in the National Final. Winner of the Polish edition represented our country at the World Finals in Bucharest. The 8th edition of the competition was enriched by the training program. Participants have the opportunity to “get used to” the simulation without affecting the outcome of the competition stages, and to make even the most courageous decisions. A subsequent round of training were the five stages of decision-making cycles.

On May 25 participants began the first stage, the “real” competition. Teams were divided into groups. Only one team from each group was promoted to the next round. 62 of 310 companies advance . Among them there were 26 companies teams and 36 academic teams .

Phase II began on September 3. Till Oct. 22 teams had an opportunity to confront their knowledge and skills in management. It was attended by 62 teams. Again, they were divided into groups, where only one from each group were promoted to the finals (as in the first round). National Finals of the Competition were held on Oct. 28 at the Polonia Palace. Two corporate teams and six students compeet in it.

The winning team of the national tournament – team of the University of Warsaw, Warsaw Leaders sponsored by Deloitte – represented Poland at the World Finals in Bucharest April 16, 2008 year.