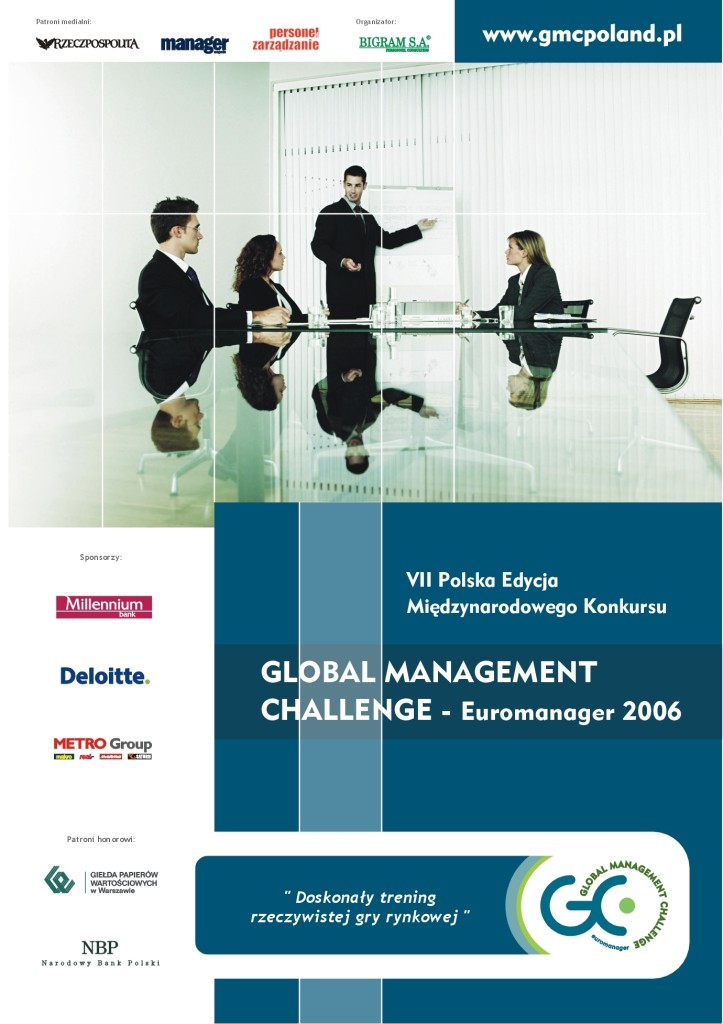 On November, 22nd, the seventh domestic edition of the international contest GLOBAL MANAGEMENT CHALLENGE 2006 was completed. The competitors were eight of the best teams selected from among the 267 teams participating in the contest.

The final was held at METRO Group. All teams were to manage a company of the same history. „It did not look too good. Internet sales were developed, but the company had been in a state of deep stagnation for four quarters. We all knew the only solution would be to develop the retail sales network in the European Union and NAFTA. The question was, how to do that?”, says Piotr Wielgomas, president of Bigram S.A. Personel Consulting – the organizer of Euromanager contest. The task of the teams was to manage the company in a manner allowing it to obtain the highest share value on the virtual stock exchange.

The results were announced in the evening during the great Gala Dinner. The official part of the meeting was hosted by Ms. Iwona Schymalla. After greeting the numerous guests, the results were read aloud.

The best strategy of development was implemented by the student and manager team of Millennium Bank. Sigma won the first place and it is to represent Poland during the World Final of the contest in Macao in April 2007. The team members received their diplomas from Mr. Tomasz Pasikowski, the Memeber of the Management Board of the National Bank of Poland – the honorary patron of the cotest. SIGMA team, consisting of: Michał Kierzkowski (leader), Maciej Bryński, Ewa Gasperowicz, Piotr Skibiński, Marcin Suszczewicz. (www.grupasigma.pl)

We wish to congratulate one more time all final teams!