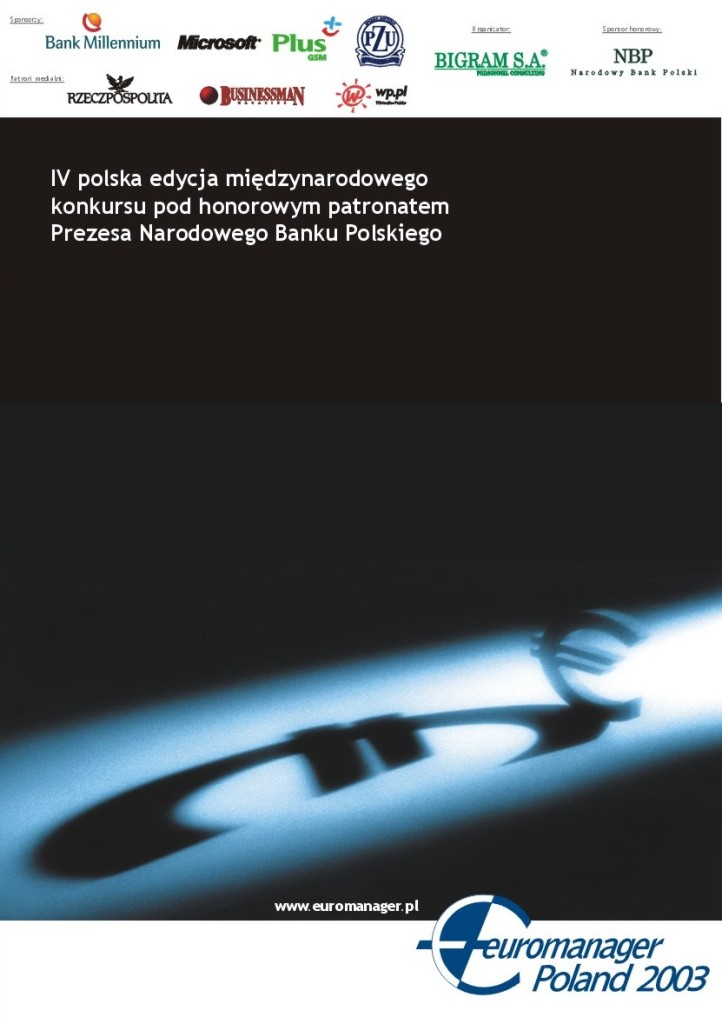 The fourth edition of the Euromanager Poland took place in 2003. The project involved more than 30 companies and more than 20 universities – a total of 248 teams.

Honorary Sponsor – Polish National Bank – decided to donate the selected 50 student teams seeking to participate in the fourth edition of the competition.

On November 4th, 2003, another final of the Euromanager Poland contest was held.
During the one-day session, organized in the modern Westin hotel in Warsaw, 8 teams, selected from 248 teams participating in this year’s edition, were competing.

Similary to the first two stages, held between May and October, the main task of the participants was to manage a company on a simulated market. The game encompassed five financial quarters. Every team had about an hour to make a series of decisions. The domestic contest is held under a great time pressure, which requires very good teamwork of the participants.
Taking advantage of their analytical skills, market forecasts, knowledge, experience and sometimes their intuition, the teams competed for the title of the “Euromanager of the Year”. The winner was the company with the highest share value achieved during the simulation.
The results of the final are presented below:
In accordance with the international tradition, an official announcement of the results of the 4th edition of EUROMANAGER POLAND took place on the same day during a banquet – the Gala Dinner.

Prize giving ceremony, Westing Hotel
From the left: Andrzej Bratkowski – Vice President of NBP, Piotr Wielgomas – BIGRAM – the team of winners, Pedro Alves Costa – SDG, the world organizer. The host of the Gala was Ms. Iwona Schymalla.
The main prize was presented by Andrzej Bratkowski, Vice President of the National Bank of Poland. Mr. Bratkowski acted in the name of the President of NBP Leszek Balcerowicz, who assumed the honorary patronage of this year’s edition of the contest, and, at the same time, was the chairman of the Jury of Euromanager Poland 2003.