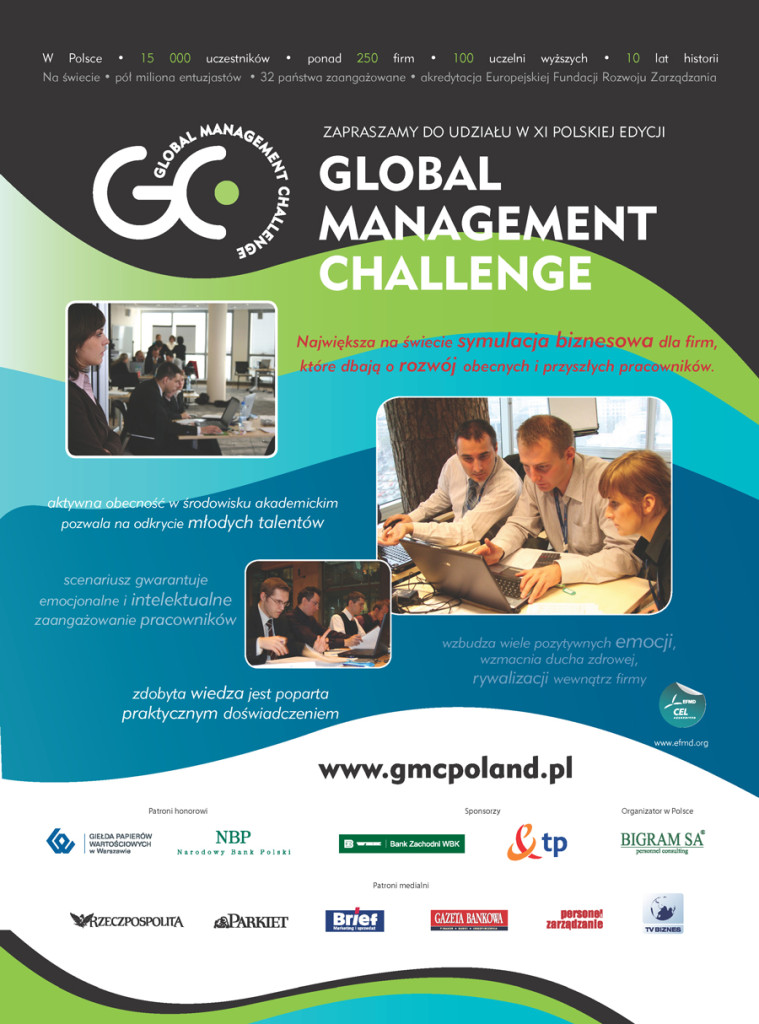 The 11 edition of GMC Poland started in October 2010. There was another record number of participants – 600 registered teams, almost 3000 people.

The Honorary Patrons of the edition were National Bank of Poland and Warsaw Stock Exchange. The General Sponsors were: Telekomunikacja Polska, Bank Zachodni WBK and Intrum Justitia.

The edition consisted of: training program, two stages, semi-final (on-line) and national final, which took place on 28 March 2011 in Orange Labs in Warsaw. There were only 6 best teams taking part in this stage, which is just 1% of all registered teams.

Training program was an ocasion to get familiar with the rules of simulation. Decisions made had no influence on the following stages.

The second stage started on 10 January and finished on 18 February 2011. Among advanced teams were representatives of Bank Zachodni WBK, Intrum Justitia, Telekomunikacja Polska, ITI Corporation, Imperial Tobacco and others, as well as the students of University of Economics in Poznan, Warsaw University of Technology, University of Gdansk, Warsaw School of Economics and others. Student teams were supported by, among others, Jeronimo Martins, TAP Portugal, British Polish Chamber of Commerce.

There were 38 teams advanced to the semi-final round – representatives of Polska Telefonia Cyfrowa, Jeronimo Martins, Bank Zachodni WBK, Telekomunikacja Polska and others, as well as the students of f.e. AGH University of Science and Technology, Univeristy of Warsaw, University of Economics in Wroclaw, Adam Mickiewicz University.

The national final took place on 28 March 2011. The results were announced on the same day during an official Gala, which took place in the Room of quotation of Warsaw Stock Exchange.

The winners were Guachanche Barracuda – a team created by students of Warsaw School of Economics and University of Warsaw. The team took part in the international final. Polish representation achieved a very strong forth place.

The additional event was a meeting “Play GMC – Win MBA”, which took place on 29 November 2010 at Kozminski University in Warsaw.