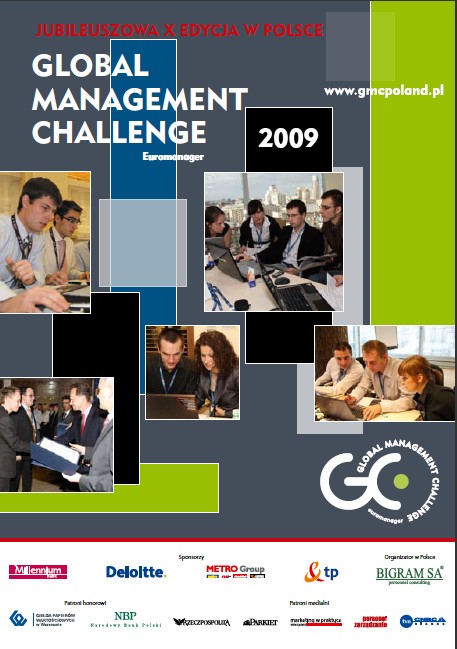 The 10th anniversary Polish edition of the Global Management Challenge was launched in May 2009. Interest in the project exceeded all expectations. A record number of 534 student and company teams, which is nearly 2000 people, joined the competition.

X edition of the competition was held under the patronage of the Warsaw Stock Exchange and the National Bank of Poland. The main sponsors of the 9th edition were : Millennium Bank , Deloitte , METRO Group and Polish Telecom.

The competition was run in stages: training program , two stages of eliminations (played on-line) , Semi-final played in Leon Koźmiński Academy, National Final played in Bank Milenium Headquarters and World Final which take place in May 2010 in Khanty Mansiysk in Russia. The training program which was played fot the 3rd time, prepared participants to take part in the project. Next stages had the five cycles of decision-making.

On May 25  participants began the first stage of the “real” competition. The teams get into the role of virtual board and take the competitive struggle on the international market. Teams were divided into 72 groups (seven or eight teams in each one) . The effectiveness of teams within groups was assessed on the basis of share prices of the companies. Two teams in each group progressed to the second round – in total 144 teams.

On November 23, we started National Semi-finals. At this stage 18 teams competed with each other and were divided in 3 groups.

The National Finals started on November 21. During a one-day session in Warsaw rivaled only six best teams . The results were announced at a ceremony on the same day . The winning team of the national competition – SAMBA team from Warsaw University, Warsaw Medical Unversity and Higher School of Management – went to Russia, where he represented our country at the World Finals of Global Management Challenge 2009 .

Another event in the anniversary edition was companies teams meeting at Kozminski University in Warsaw during the “Play in GMC – Win an MBA.” event.